BOMBSHELL: DECLASSIFIED MEMO PROVES THE PENTAGON HAD ZERO EVIDENCE OF WMDS IN IRAQ 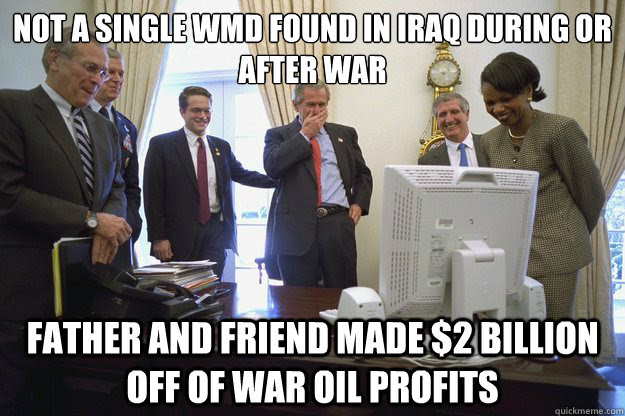 Thirteen years after the invasion and occupation of Iraq, it is common knowledge that this war of choice was based on fabrications and slick propaganda. There were no weapons of mass destruction, the country posed no real threat to the U.S., and it was not a hotbed of terrorism until after Saddam was deposed.
Now, a bombshell has dropped in the form of a leaked classified report—a “smoking gun” if you will—that confirms the utter deception carried out on the American people to support the invasion. It demonstrates just how far the cabal under George W. Bush, making up a group known as the Project for the New American Century (PNAC), would go to prey upon fear in pursuit of global hegemony.
READ MORE:http://www.thedailysheeple.com/bombshell-declassified-memo-proves-the-pentagon-had-zero-evidence-of-wmds-in-iraq_012016