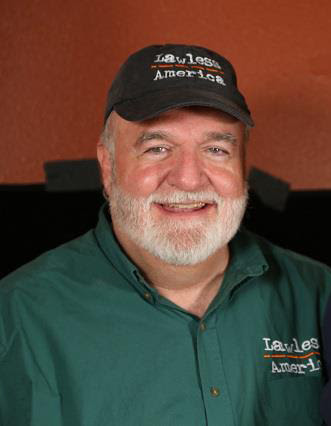 
Bill Windsor is a 66 year-old man from Atlanta, Georgia, who started a Youtube series entitled “Lawless America,” intending to make a grassroots documentary about our corrupt courts.
I have followed the series closely. I can relate to Bill because he seems a lot like me, an individual citizen who worries about “the law.” Now he is reportedly in prison for his trouble, in Texas. This is a real shock.
I learned of Bill’s October 29, 2014 arrest from the website JoeyIsALittleKid.blogspot.com.au, which is run by a very energetic detractor of Bill. (A commenter on his blog asks, “Are there 92 inmates waiting to ‘date’ Bill?”)
Imprisonment is actually a nicer fate for Bill than what I had imagined. Since July 24, 2013, Bill had failed to add any items to his website, LawlessAmerica.com. I figured he might be dead, or mind-controlled, as he had made an unassailable case against the current justice system in America, especially the family courts.
(Yes, you heard me. I said I feared for his life because he spoke out against unfairness in America. Zheesh! What a world.)
Bill Windsor does not help particular litigants to pursue appeals. He only presents cases to us, by interviewing citizens who tell their story. You can watch them all at Bill’s Youtube channel, Lawless America.
They are stunning: a cross-section of Americans who have been outrageously deprived of due process or fairness. One person whom Windsor interviewed is a Montana senior citizen who showed how her life got ruined when her employer accused her of embezzlement.

I FILMED TWO SEGMENTS FOR LAWLESS AMERICA TELLING MY FAMILY'S EXPERIENCE WITH THE FAMILY COURTS IN ANTRIM/GRAND TRAVERSE COUNTIES AND I ALSO FILMED A SEGMENT ABOUT THE TRAGIC DEATH OF WAYNE WYNKOOP IN CHARLEVOIX COUNTY.
MY STORY:http://theprettylieortheuglytruth.blogspot.com/2013/04/child-protective-services-law.html

" Bill Windsor was in town about 3 weeks ago for an Oakland County Circuit Court hearing in which he was trying to get a PPO against a jerk cyberstalker (of me and Marty Prehn too) by the name of Sean Fleming. Windsor lost the case due to lack of credibility. Marty said he slipped off his dress pants in the parking lot to get down to his street shorts and his bare feet, and drove off."

" Thank you. I heard that he is out now and has even posted bail for some people he met while in Texas jail. (Not confirmed)"