Are Salmon Dying from Hot Water in Northwestern Rivers, Or Could It Be Something Else? 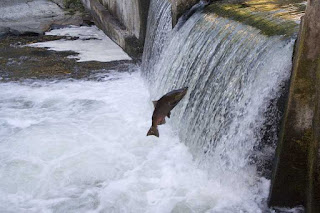 “Thirteen species of salmon and steelhead are listed as endangered or threatened in the Columbia River basin.” [6]

That wonderfully healthful fish known for its precious fatty acids, salmon, is endangered by the very waters in which thousands return to spawn and produce future salmon fingerlings.

Here’s an article that talks about the ecological imbalance of the Columbia River, especially water temperature, which is reducing greatly the number of salmon, an apparently long-held dietary staple of the Northwest, including for Grizzly bears.
READ MORE: http://www.activistpost.com/2015/07/are-salmon-dying-from-hot-water-in.html
Posted by Pretty Lie at 5:58 PM