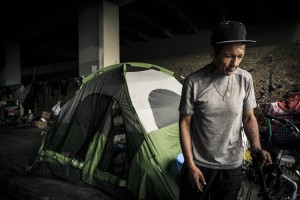 Photo: Theeightpointone for The Intercept


A year ago he slept in his own apartment, but today Charles Jackson sleeps under a bridge bordering Silver Lake, one of the more fashionable neighborhoods in Los Angeles. A few dozen strangers share the encampment; some become neighbors, while others come and go. Jackson wants to get off the streets, but as many of those who live on the margins have found, it is easier to lose a home than find another.
“People say, ‘This is going to be temporary, you know, until I get out from under this rock,’” he told me. A kind-looking brown-eyed man in his mid-50s, Jackson stands in front of the tent he lives in, looking away as we talk, his voice barely louder than a whisper. Beside us, Jackson’s white-and-tan terrier, Ozzie — well-groomed and clearly beloved — pokes his nose out from the front of the tent, panting in the midday sun. “Two years pass by, four, five years pass by; before you know it, you’re ten years homeless in the streets because out here, time is nothing. You get to not know what day it is, what month it is.”
Life on the streets, he said, “grows on you.” His well-stocked tent is evidence of this. There’s a full-size mattress, a stool, a big jug of water, pots and pans — the makings of an apartment, underneath a bridge.
READ MORE:https://firstlook.org/theintercept/2015/07/25/criminalizing-homelessness-in-los-angeles/
Posted by Pretty Lie at 10:46 AM