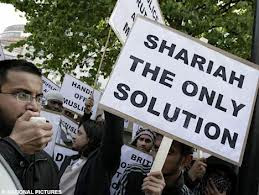 There are some very dangerous immigration trends taking in place in Western Europe and the United States. Both regions of the world beg the question: How many third world immigrants can a nation absorb until that nation ceases to be what it once was?

In a court case involving a Middle East terrorist, the Muslim Brotherhood Plan for North America was entered into evidence. Here are are some of the excerpts with regard to what they have in mind for the United States.
From the Clarion Project:


Page 4:
“Enablement of Islam in North America, meaning: establishing an effective and a stable Islamic Movement led by the Muslim Brotherhood which adopts Muslims’ causes domestically and globally, and which works to expand the observant Muslim base, aims at unifying and directing Muslims’ efforts, presents Islam as a civilization alternative, and supports the global Islamic State wherever it is.”
Page 5:
“…the Movement must plan and struggle to obtain “the keys” and the tools of this process in carry out [sic] this grand mission as a ‘Civilization Jihadist’ responsibility.”
Page 7:
“The process of settlement is a ‘Civilization-Jihadist Process’ with all the word means. The Ikhwan [Muslim Brotherhood] must understand that their work in America is a kind of grand jihad in eliminating and destroying the Western civilization from within and ‘sabotaging’ its miserable house by their hands and the hands of the believers…”
“[W]e must possess a mastery of the art of ‘coalitions’, the art of ‘absorption’ and the principles of ‘cooperation.’”
Page 18:
“A list of our organizations and the organizations of our friends” – This is where the Muslim Brotherhood listed its front groups in the U.S.. Note that prominent organizations like CAIR, ISNA, ICNA and others are named here.”

Could it be anymore clear. This is a clear and present danger to our way of life in the West..
READ MORE:http://www.thecommonsenseshow.com/2015/07/24/the-planned-sharia-law-invasion-of-the-united-states-and-western-europe/
Posted by Pretty Lie at 7:49 PM